Appearance:
Round orbs, with or without a structure.  Angular, sometimes irregular Elongated orbs, these are often moving orbs Clusters
Most orbs are balls that contain some energy.

What do I think of orbs?

What do other people think about orbs?

There are 4 widespread “beliefs” about orbs

A) A shutter time time of 1-2 seconds or more shows more spots, especially visible in shots taken in the dark.

This happens because the CCD is stimulated by something, such as light, heat, magnetism, so this phenomenon is called a “hot pixel.”
B) The surface of the CCD inside a digital camera consists of thousands of pixels.

Each is sensitive to light and together they make the final picture.

Sometimes one or more of these pixels are broken.  This has a “hot pixel” effect. Visible as a white or colored dot on an image and typically slightly larger than one pixel.

But not all the orbs on pictures can be explained in this way.

Ask yourself the question why is the CCD  stimulated at that time by whatever energy to cause this  “hot pixel.”?

Also on some pictures we took with an ordinary old fashioned film camera in India there are quite a number of orbs around the children sitting outside a school in a rural village.

In the Pyrenees we saw strange light phenomena suggestive of an UFO.
But it was too dark to take pictures. 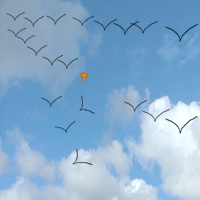 On Monday, March 7, 2005, at about three o’clock in the afternoon, on the route from Bedum to Loppersum I saw from the train large groups of migratory birds flying to the north. Some flew in their typical V-shaped flight. In one such group, I saw light balls and wherever a light ball appeared the branch of the V-shaped form was broken, the birds regrouped and flew again in form, later on another orb appeared in another place, disorientating the birds, and they were regrouping again. This happened about four times while I was watching.

There were no hunters shooting at that time. 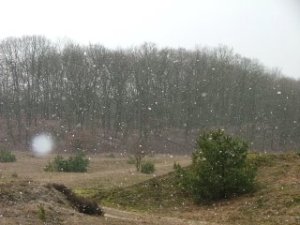 Near Kootwijk. It snowed and in these conditions light phenomena can be expected when you use a flash. But this picture was taken without flash!! Moreover, the sphere is abnormally large in relation to the snowflakes. Yolanda saw – before the snow started – a bright orange orb at the tower in this area.

Orb at a dolmen in Drenthe:  but this might be due to lensflare

Orb at cirkel in Schotland (Callanisch)

Orbs at an excursion I made with a group of geomantic students (this is just effects of the weather, or is it?)